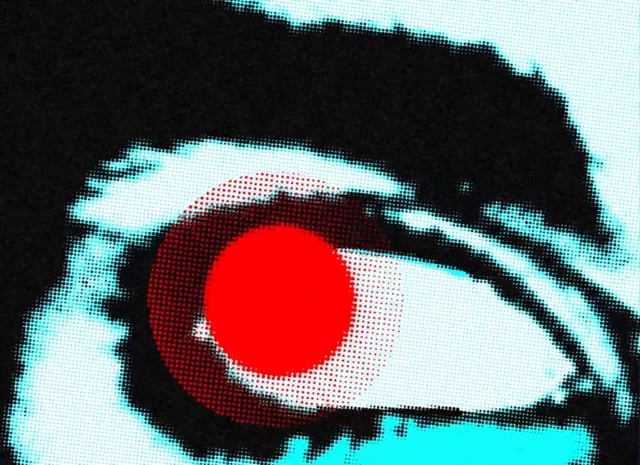 ‘Big bro is fucked up watching you’
Interactive installation, HD, 2014

The installation operates with digital processing, scanning objects in the vicinity [within a radius 5 m of projection area] and interpreting the movement data into a conceptual point of view. The action is real-time. The image of an eye follows the visitors until more than 5 people cross the projection zone. This creates disturbance and produces glitches in the image on the screen. The installation is a metaphor for the influence of big data and algorithm holders and the way they direct people’s behavior or the course of events and how it can be reversed if people together would define the system in which they would like to live. It is a visual representation [the projection zone of installation] of the global scene of the relationship between individual and the system in which they live [the installation screen with a watching eye], and we can observe the unhealthy system being hacked by the people who come together to protest and say ‘no’ to those, who choose to monopolize. The project works with idea of renewal and game-changing paradigms between art and politics, an individual and the system by pushing the former towards a direct action, rethinking and reconsidering the two-way influence field itself. The conception utilizes the interaction method, where the glitch becomes not a regular error but a significant victory over the system as a whole.

The project was created after the events of Euromaidan in 2014 in Kyiv, Ukraine.